Rome Map of the attraction, the Monument of Victor Emanuel II

Victor Emanuel II (italian, Vittorio Emanuele II) was born in  1820 and he was the king of Sardinia from 1849 to 1861 when he become the King of Italy when it finally was united. He was the King of Italy until he died in 1878.  Victor Emanuel played i minor role in the success of the unification but since he was the first king he got  very popular among the people and it was decided to honour him with a monument. In 1885 the building project startet and it finally was finished 1911 (the same year as the 50-year celebration of the unitiy). Guiseppe Sacconi was the architect of the magnificent monument. Not everyone likes the monument, many find it  exaggerated. Typewriter and wedding cake is two nicknames for it.

When you visit Rome you can’t miss the monument if you pass the square called Piazza Venezia. The attraction is huge!

The Map shows where you can find the Monument of Victor Emanuel II in Rome. 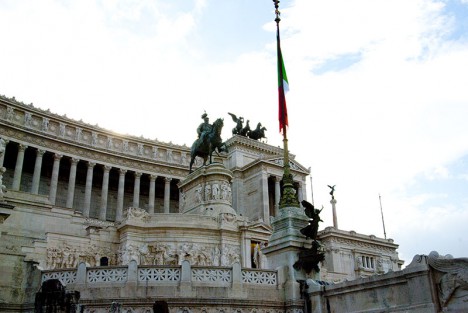 Picture of the Monument of Victor Emanuelle in Rome